Your concern is my incentive

How do we work together?

My qualifications and experiences

2. Test your priorities when presenting

With my extensive experience in business coaching and leadership, you too can further develop your solution competencies and potentials.

I combine 25 successful years of management experience in the international financial industry with a certified business coaching training – you can benefit from it as well! 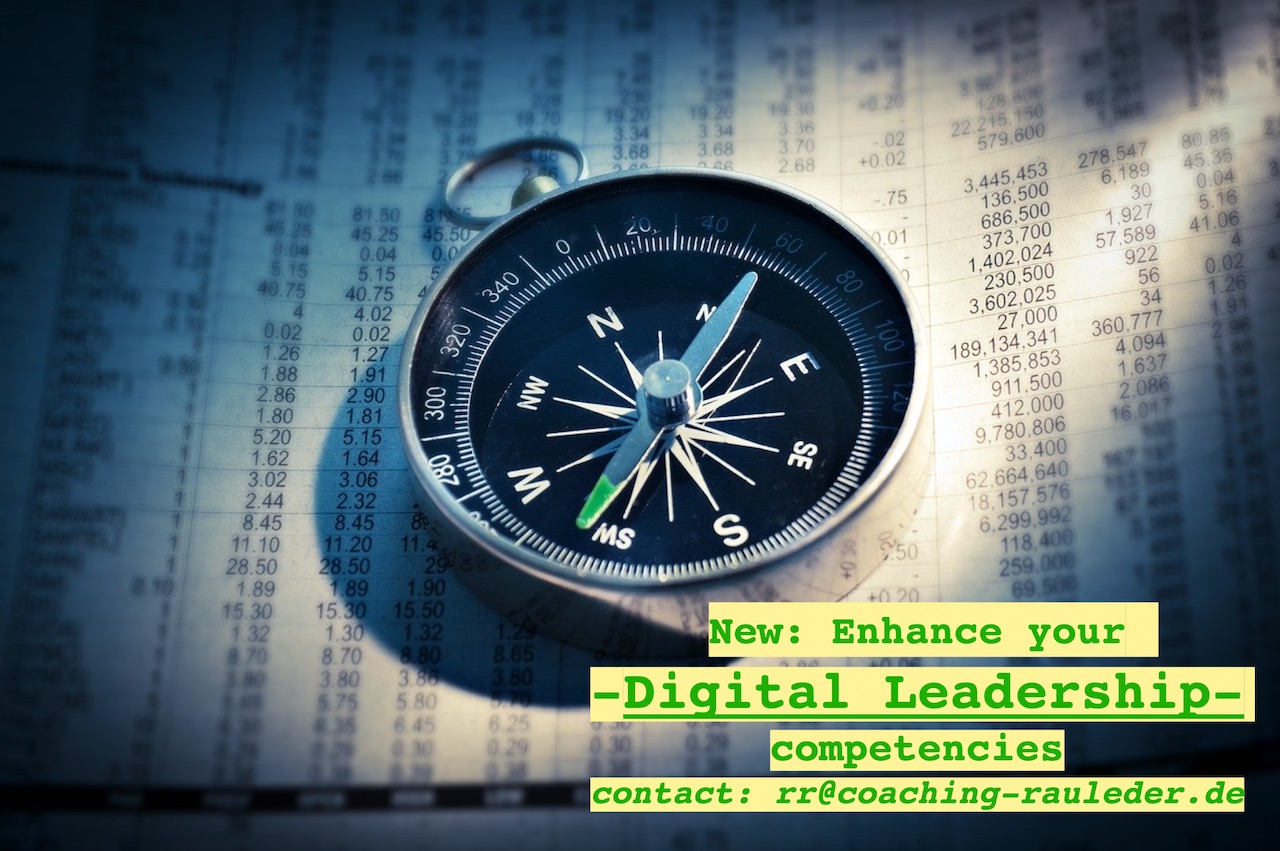 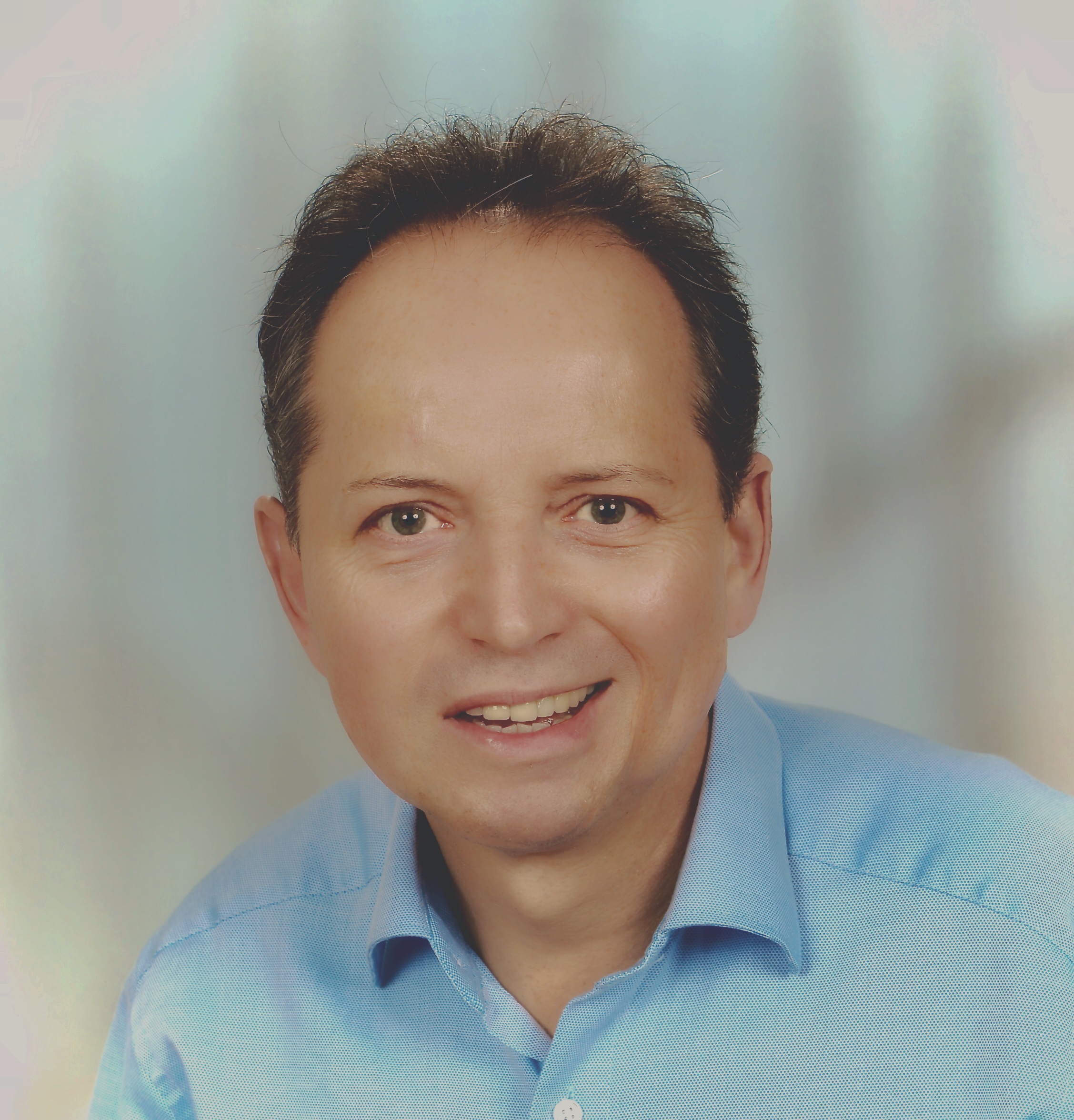 Your concern is my incentive

Then we should here arrange for a non-binding and free initial consultation in business coaching.
After describing your request, we can jointly discuss my support in the development, evaluation and selection of your solutions.
We can arrange our meeting points very flexibly: with you, in my coaching rooms, by video / telephone, in a café or as a walk.

„Courage is nothing more than a series of small steps“ 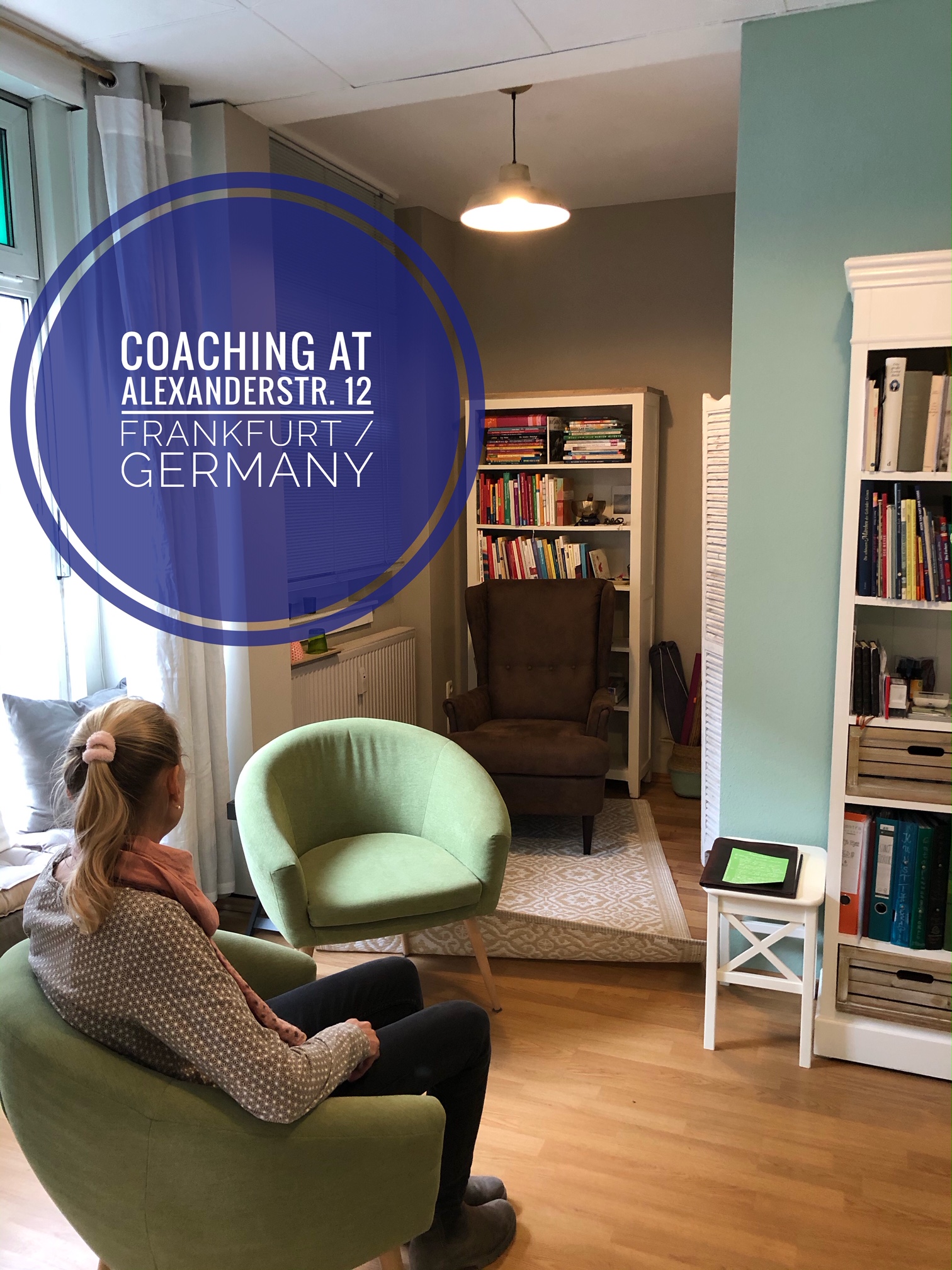 How do we work together?

Your experience and potentials as a manager are the key to the solution in business coaching: unexpected questioning techniques as well as targeted changes in roles and perspectives open up new perspectives and hidden solution-competencies.

In the first step we jointly translate your topics into concrete, positive and feasible goals. In this way, mutual relationships in your work environment become transparent and understandable.

In the following sessions, we mainly work with solution-focused techniques from systemic business coaching practice, which will bring you step by step closer to your goals. The constant adaptation and evaluation of our cooperation guarantees the highest possible quality of our meetings. 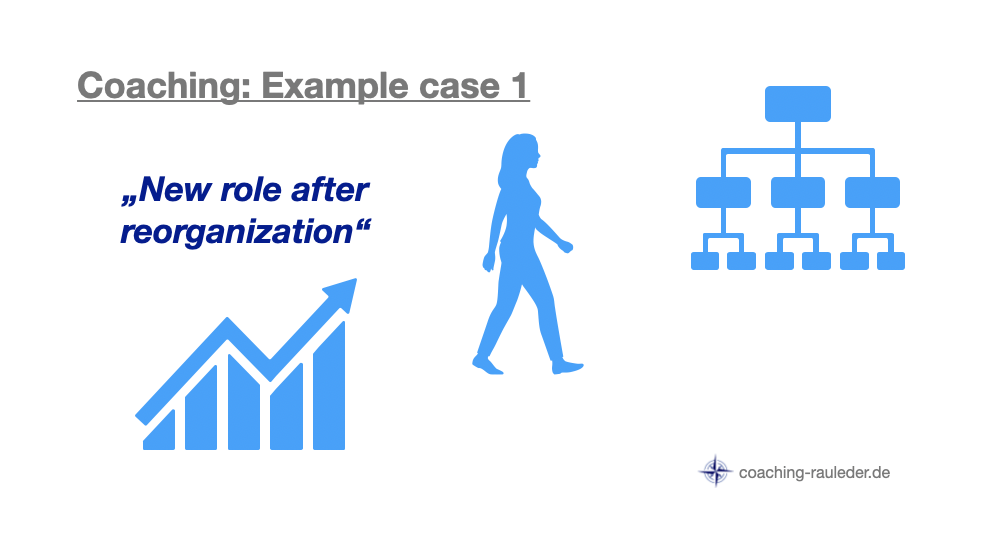 Ms. N. asked me for support in fall 2019 due to a reorganization in her company.

In our first one-on-one conversation, she described the effects of the restructuring on her personal work environment as a manager and her related concerns:
1. Acceptance of the company’s decisions
2. Balance between „give and take“ in her new role
3. Questioning the corporate culture

In the following sessions, once in the form of a walk, we worked on the derived goals with different „tools“ from systemic business coaching:
– Swapping roles
– Squares of values
– Basic aspirations
– Re-framing
– Visualizations
– Role compass

As a result, not only the interdependencies in the company became transparent, but Ms. N. was also able to activate self-reinforcing, positive processes. Hidden potentials and problem-solving skills became clear to her again. This ultimately led to more serenity and a better „work life“ balance.

„The solution doesn’t care how the problem arose“ 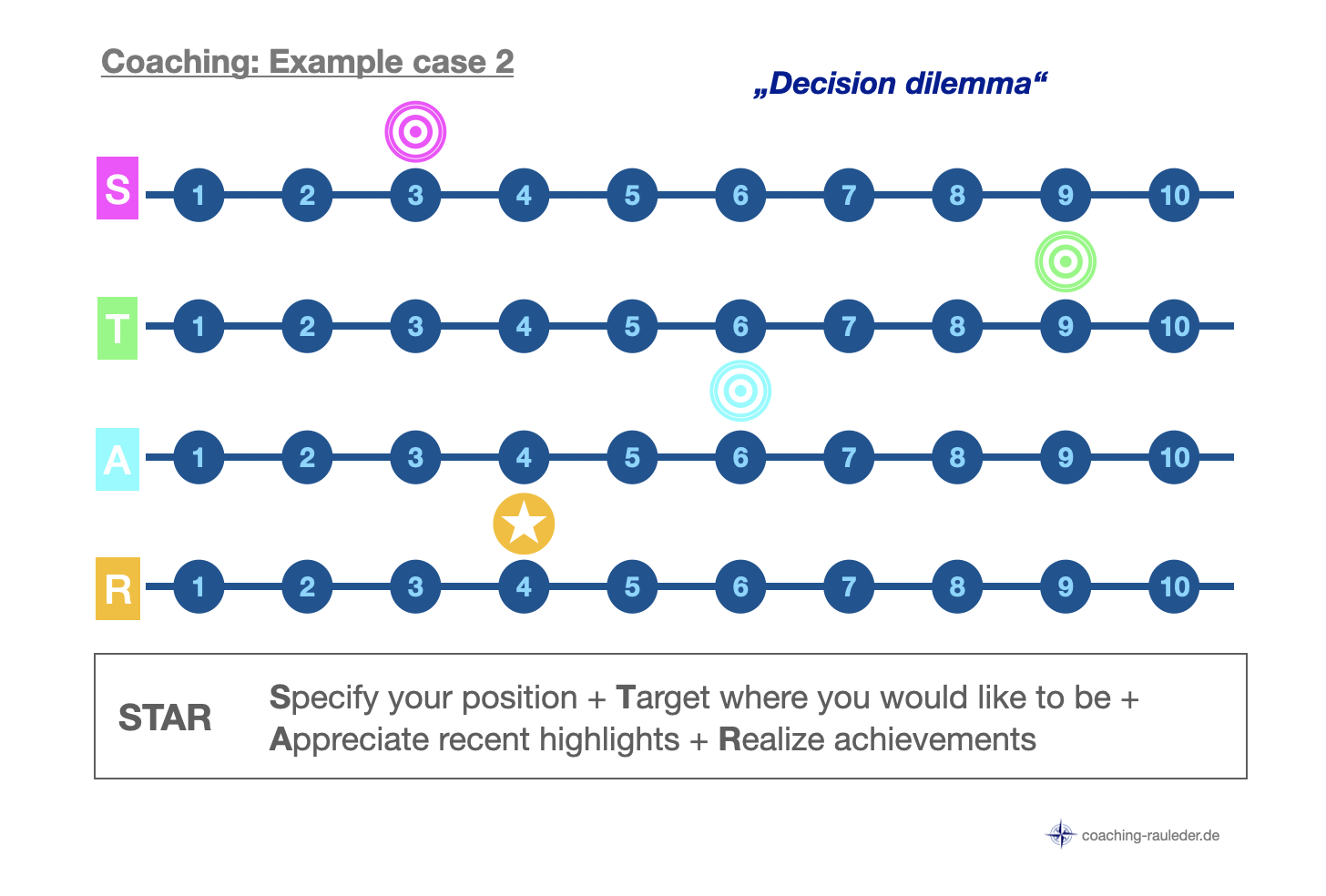 Mr. S. contacted me at the end of March 2020 with a „decision dilemma“. Due to the corona crisis and Mr. S.’s high workload, we initially only agreed on one business coaching session as a video conference.

“What would have to happen in the next 40 minutes so that our conversation was useful for you?“ was my first question. Mr. S. then described his enormous workload with little sense of meaning for him. He had to decide on a less well paid but potentially more meaningful external job offer at a smaller company in the next few days The decision „stay or change“ would be particularly difficult for him in these uncertain times. He would feel as being “stuck“.

Increase in options for action

In order to increase the decision options, I first introduced the „Tetralemma“-technique with 4 options:

Mr. S. saw options C and D initially as being contradictory, since, for example, he could not stay and change at the same time. After some consideration, however, it became clear that Mr. S. could definitely stay with his current employer and reject the specific job offer whilst still dealing with other external offers. As an example of option D, self-employment came to his mind, but he currently did not consider himself as being sufficiently prepared.

“Where do you see yourself currently on a scale of 1 to 10 with a view to your confidence that you can make the ‚right decision'“ (where 1 stands for completely unclear and 10 for crystal clear).

Mr. S. answered this „position question“ with a 3, whereby his target was a 9. First I congratulated him on the 3 and asked him about the observable differences for him and his environment – both regarding the 1 as well as his targeted 9.

“When did you stand with sufficient confidence at other decision situations?“. Mr. S. described the choice of his university studies and what helped him with a 6.

„How do you notice that you are moving from the current 3 towards 4?“

The last question assumes that progress is inevitable: Mr. S. said that he would be more balanced and his wife would notice that he would more listen to her again and smile more often.
I could not (and did not want to) take Mr. S.’s decision after 40 minutes, but I could say goodbye to a client who was clearly more confident and determined with concrete steps in mind for the next few days. His great potential and and tested solution-competencies were practically ‚tangible‘ – I am very sure that he will take the ‚right‘ decision for him.

“To see clearly, a change of perspective is often enough“ 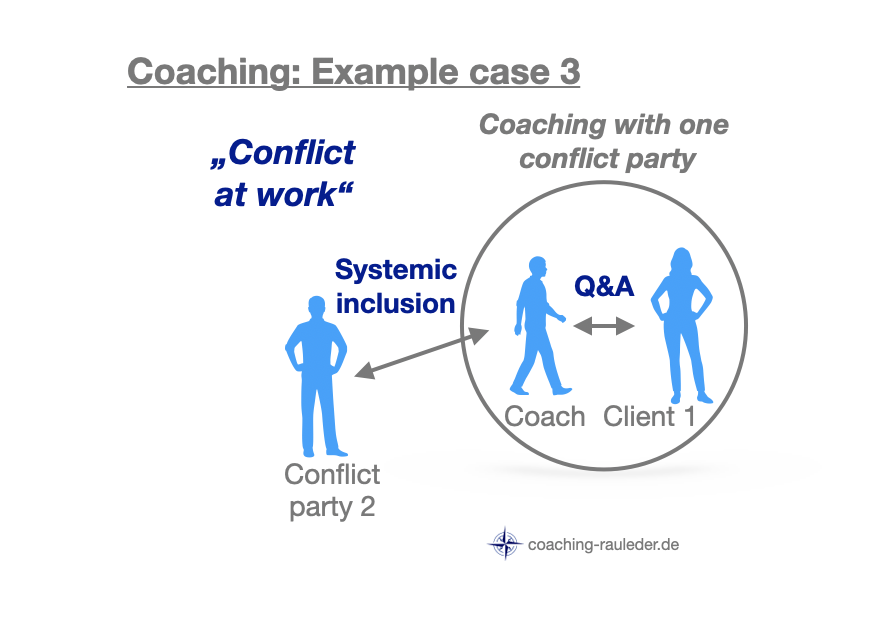 Conflicts in the work environment with superiors and employees are basically an “evergreen“ in day-to-day coaching sessions and cannot be principally avoided. Usually only one of the conflicting parties comes into coaching, namely the one who suffers the most from the conflict or is looking for a solution.

Techniques from solution-focused short-term coaching are particularly suitable in such conflict situations. With scaling questions, the current “level of suffering”, small progress that has already been made unnoticed and wishes can be made tangible and measurable.

The focus in coaching is always to have the “goal in mind” (from the client’s point of view) in order to not get lost in details, causes and blame in connection with the conflict. The challenge for the coach is to remain neutral (or rather: “all-party”) because there is a natural tendency to empower the client in her problem. The „art“ is to let all parties to the conflict have their say, i.e. even those who are not part of the coaching – they are always „virtually“ present anyway. The perspective of “the other” is often surprisingly correct from the client’s perspective, since they have sometimes lived with their conflict in the workplace for years.

How such suffering can be transformed into first solutions should be illustrated by my following example case:

Ms. P. approached me in April 2020 for coaching through a recommendation and despite the corona crisis and constant time pressure due to her high workload. She suffered from the poor appreciation by her manager who would not recognize her work and commitment to the company. Rather, her work would either be taken for granted or simply overlooked. Over the years, Ms. P. perceived these working conditions more and more as a conflict with her boss. This not only affected her motivation and joy in and with her work, but also her general well-being. In her private environment she became increasingly grumpy and dissatisfied, which was also shown by further conflicts with her partner and friends.

She described her goal as „once again being able on a Sunday evening to look forward to the following Monday as a working day“. 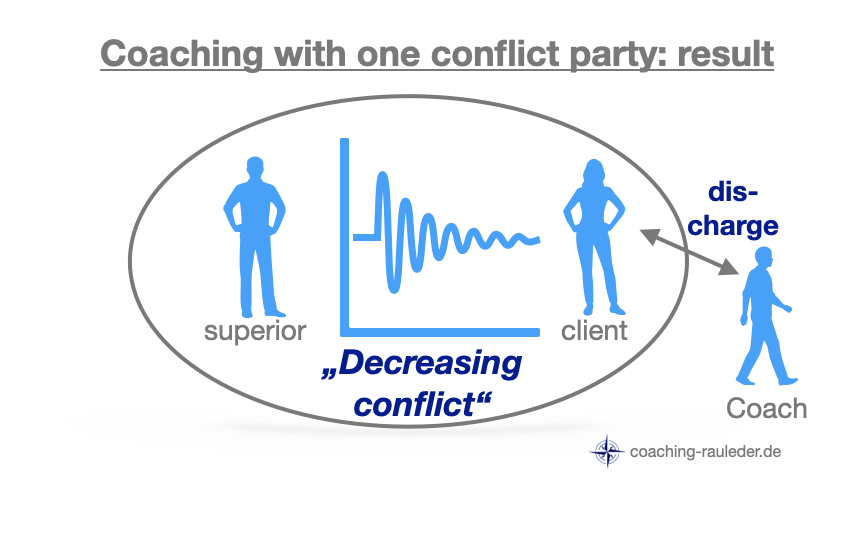 True to the motto „The solution does not matter how the problem arose“, the key to resolving the conflict lay with the client herself: her own behavior has led to reactions and back-reactions, which, in this case, has further aggravated the conflict over years.

The change from one’s own perspective to that of the manager is surprisingly easy in most cases and leads to a more conscious perception of one’s own behavior and the reactions triggered by it. In such cases, the pattern interruption often succeeds through a so-called “miracle question”, which can clarify a target state, however unrealistic it may seem to the client at the moment.

In addition, progress that has already been made (“Wow, what happens that you are already at a 3?”) should be recognized verbally and non-verbally in order to increase the client’s awareness of her own solution competence and responsibility. There is no conflict at all times, which is why the exceptions, i.e. the conflict-free phases, should be deepened by asking targeted questions. In this way, the client’s confidence in the feasibility of the task can increase step by step, in this case the resolution of the longstanding conflict situation at her workplace.

After all, it is important to draw the client’s attention to observable progress in her near future, because once „the ball is rolling“, progress is more or less „inevitable“ Unfortunately, such progress is often overlooked due to too much attention on things that are considered to be bad.

As a business coach I thus achieved my real goal: to make myself and my support redundant! ?

My qualifications and experiences

In my 25 years of professional work in various management positions in the financial industry, I was able to gain a wide range of experience in employee management, development of potentials and solution-competencies as well as organizational progression.

In addition, my role as a mentor and member of the speaker committee for executives allowed me to gain valuable experience in promoting and advising employees over many yers.

My targeted advanced training as a systemic, solution-oriented and certified business coach puts the work with you on a professional basis.
My degree is recognized by the German Federal Coaching Association (DBVC) and certified by the International Organization for Business Coaching (IOBC). In addition, the Systemic Society (SG) awarded me the title Systemic Coach (SG).

I am happily married and have a wonderful daughter.

My credo in a nutshell: „Business coaching – mobilize your potential & solution-competencies!“

You can find details of my career and recommendations on my LinkedIn profile here.

You can find further reviews of my clients on my
XING page here.